This is an art project to use CGI to visualise the moon, from really close up... after it's been terraformed.

It uses real terrain data from various survey spacecraft to produce accurate as possible terrain, plus procedural enhancement to make it more... interesting... in the smooth areas. Atmosphere, water and vegetation are added and the results rendered with Povray. A reasonable attempt is made to keep things physically accurate, at least geometry-wise: you only get to see Earthrise from the parts of the moon where can actually see Earthrise, for example.

Still to do: clouds. A much better atmosphere (the current one has been blatantly fiddled until it 'looks right'; I need to think through what an Earth-like atmosphere on a body with 0.16g would look like). Better texturing --- rocks and grass look awfully bland close up, and the maximum forest draw distance looks bad. Icecaps (although I'm not sure the moon would have any; a big atmosphere would make for a very homogeneous climate).

As an aside: none of these pictures have had any tweaking. I just point the camera and render. The only control over the result is the time of day. I have an entire planet's worth of scenery to explore. I take requests!

Any comments or feedback? Let me know by emailing me at dg@cowlark.com. Meanwhile, enjoy the pictures.

Lunar nearside and farside, respectively. (Click for full size images.) Nearside is low and contains lush forests and mountain ranges; farside is all high plateau and barren rock, with the Earth peering out from behind her little sister. The sun is immediately behind the camera so as to illuminate the entire lunar disc, which makes the pictures rather dull but useful for reference. 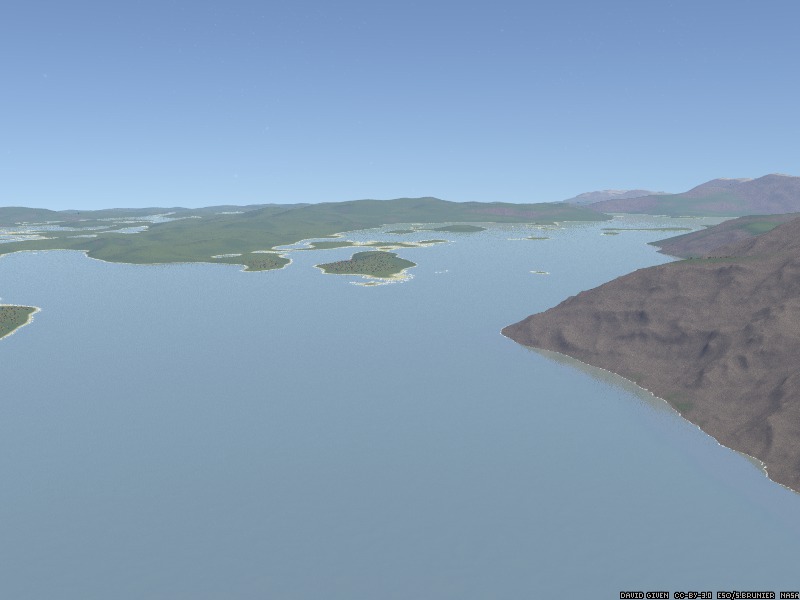 Looking north-north-east over Huygens Sound at an altitude of 5km; you can see the lower slopes of Mons Huygens to the right. The lowlands off to the left are the Bradley Peninsula. Rima Bradley is the narrow inlet in the top left. Off to the right, at the far end of Huygens Sound, are the Mons Bradley range of mountains. 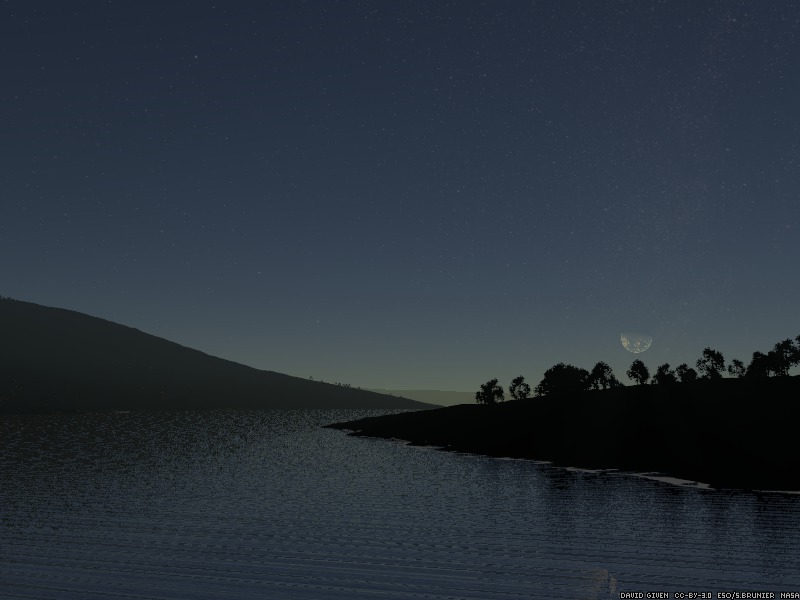 Nighttime on Kiess Island: trees are silhouetted against the night sky, lit up by earthlight. This was taken on the south coast of the Sea of Smyth. 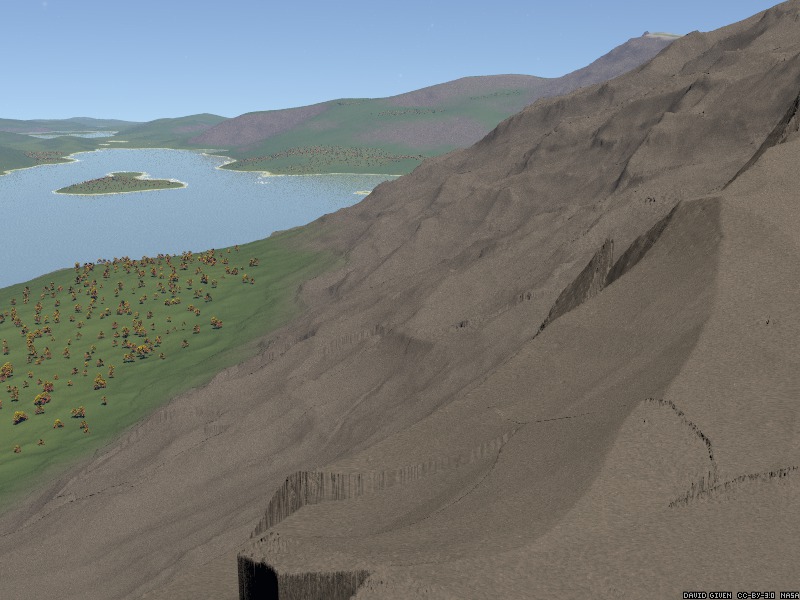 Further up Huygens Sound. In the foreground are the faceted basalt slopes of the Mons Huygens mountain range. In the distance, the snow-tipped peak of Mons Bradley towers over everything else. 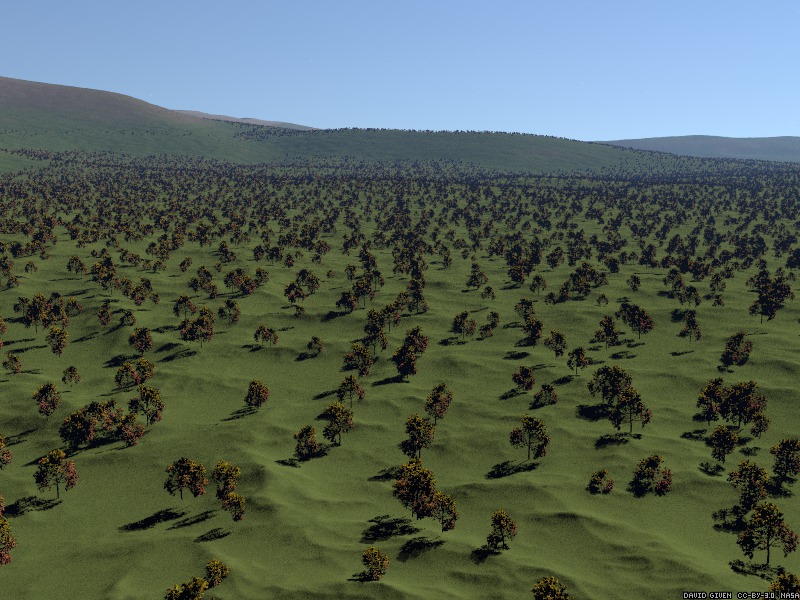 Epimenides Forest, on the western limb of the moon: vast plains, covered in the characteristic lunar maple woodland. 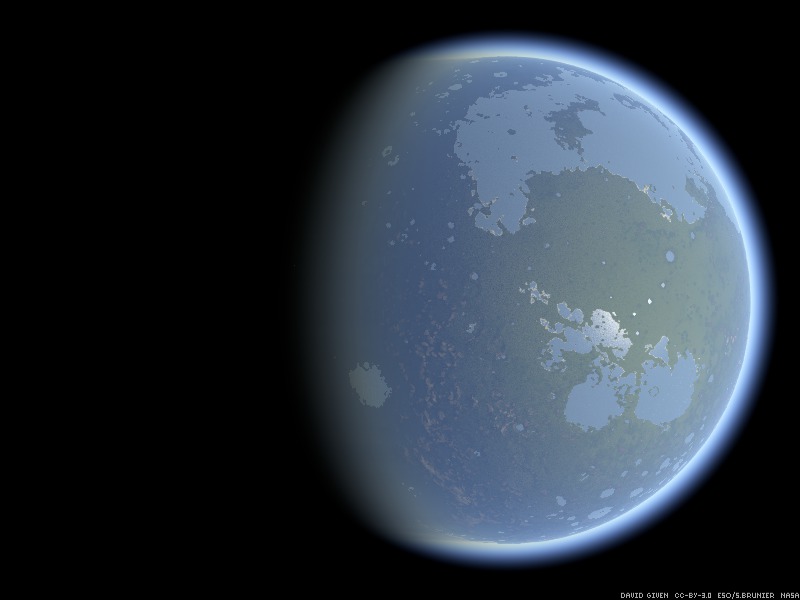 A view from space; lunar nearside is on the right-hand side of the image. The big sea top right is partly Mare Imbrium ('Sea of Rains') and partly Oceanus Procellarum ('Ocean of Storms'). The island in the middle is Jura. The big bay on the eastern side of Jura is Sinus Iridum, the Bay of Rainbows. The Chang'e 3 lander ditched into the sea just southeast of there. 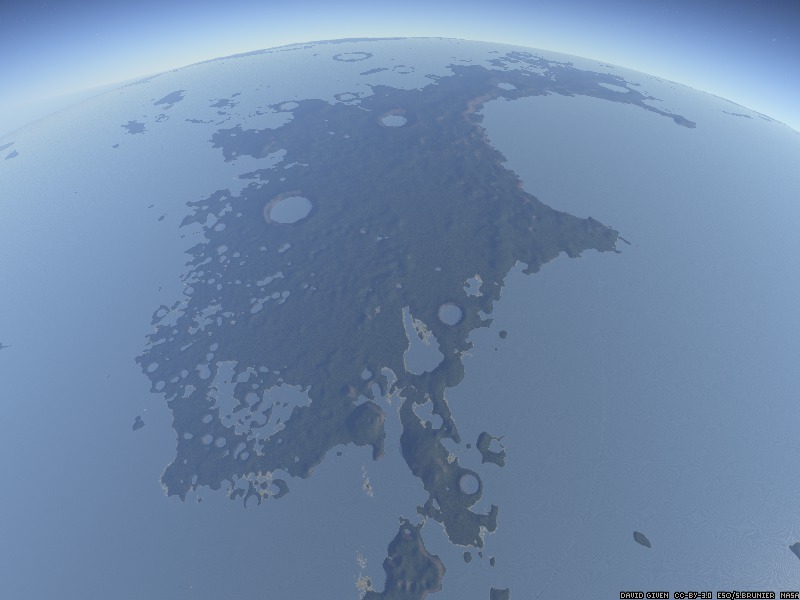 A closer look at the island of Jura, looking north. It's about 600km long, making it about two-thirds the size of the British Isles. The island is dominated by the Bay of Rainbows at the top right; the big crater lake on the west side is Mairan, and is about 40km across. The smaller one north-east of it is Sharp. On the south side is the massive hump of Mons Gruithuisen, a lava dome nearly a kilometre high. At the bottom edge of the picture, the smaller island of Dorsum Bucher marks the edge of the island chain which separates Mare Imbrium on the east from Oceanus Procellarum on the west.