b-tracker is a chiptune tracker for the BBC Micro.

The BBC Micro has a rather pathetic SN76489 sound chip, capable of three channels of not-very-accurate square wave and one channel of what is delightfully termed ‘noise’. These were cheap and cheerful and pretty common in eight-bit computers of the day. b-tracker allows you to write music for one of these, on a BBC Micro. 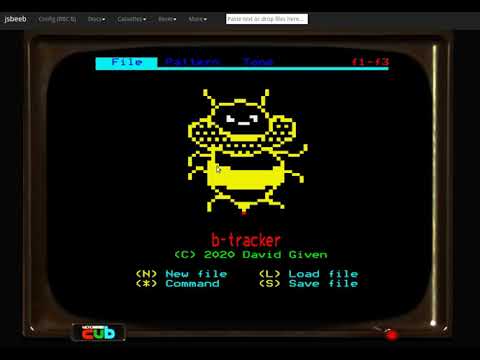 Click to play on Youtube. Or, try it for yourself via jsbeeb emulation! Press SHIFT+F12 to boot, and then load the file DEBRIS.

Unlike traditional trackers, which were designed for machines with more memory (cough Amiga cough), b-tracker has 32 steps per pattern, and each note can be either a note or a command (because that uses half as much space).

To build, you need beebasm. There’s a Makefile with the right command in it. This will generate both a raw MOS executable called btrack and also a bootable disk image also containing a demo track, a rendering of Captain’s masterpiece, Space Debris. The filename is DEBRIS.

There are three screens, selectable with f1 to f3 (f0 is not used because I couldn’t figure out how to press it in the emulator I used for development).

This allows you to load and save files, as well as clear the workspace for a new file. Pressing * will give you an OSCLI command prompt. Be careful with this; b-tracker is using absolutely all the memory, and it’s also not very good about cleaning up its interrupt handler, so don’t try to drop back into Basic or your machine will probably lock up. Press BREAK if you want to exit.

This is the heart of the editor, and allows you to edit patterns (i.e., the music itself).

Each note is displayed as the note, followed by two hex digits: the first is the tone number used for the note, and the second is the volume, with 0 being silent and f being loudest. For commands, these digits contain the command parameter.

The drum channel doesn’t play ordinary notes, instead playing eight different kinds of noise. Use 0-7 to set these. When on c3 or c3T mode, the pitch of the noise will be taken from whatever note channel 3 is playing. Unfortunately, the BBC Micro’s sound chip doesn’t play the noise channel in tune with the other tone channels. b-tracker can compensate for this, but only if the volume in channel 3 is 0 (because otherwise channel 3 will be out of tune with the other tone channels).

This is the envelope editor, allowing you to edit the notes being played. Use the up and down cursor keys to move between fields; when on the graphs, use left and right to move. Press + and - to change a value.

The two graphs show the delta per rendering tick. The pitch can be increased or decreased, but the volume can only be decreased from the value actually played.

To play a sample note, press A-G to set the note and 0-5 to set the octave.

Get the source on GitHub!

There are bugs, although it seems pretty robust to me.

This program was written by myself, David Given dg@cowlark.com; I have a website at http://cowlark.com. There may or may not be anything interesting there.